Longing and Becoming: The Masks of Sonny Assu 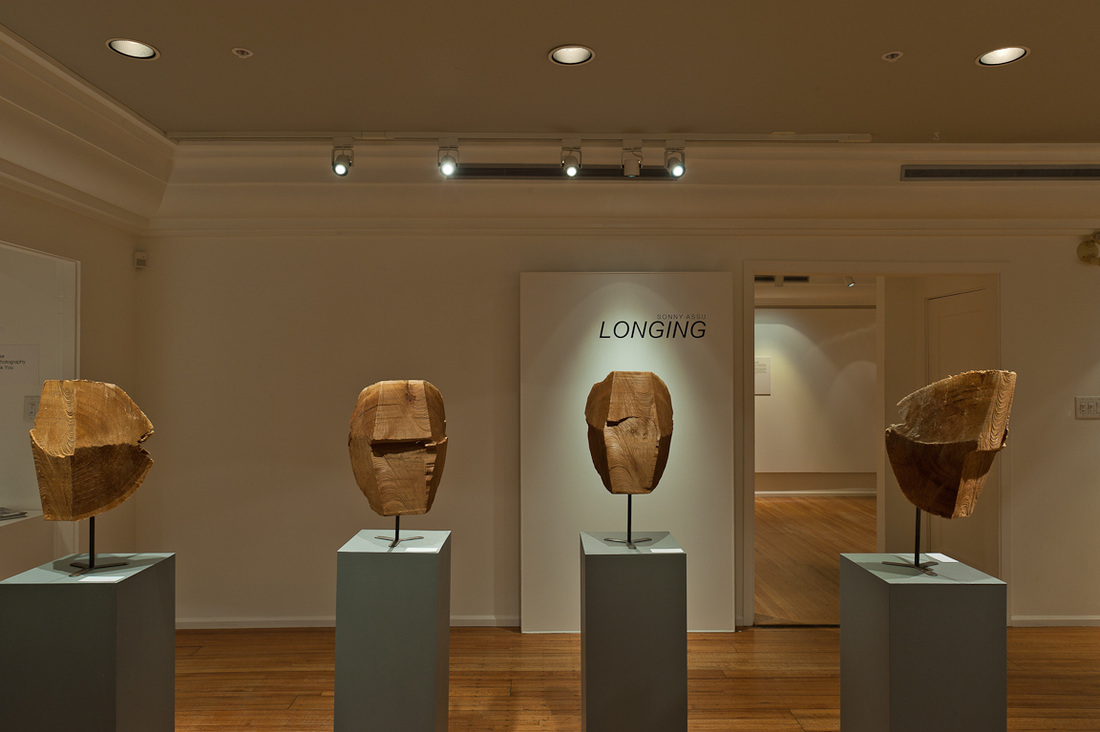 Rather choose rough work than smooth work, so only that the practical purpose be answered, and never imagine there is reason to be proud of anything that may be accomplished by patience and sand-paper.

Sonny Assu is a member of the We Wai Kai Nation, part of the Kwakwaka'wakw peoples of Northeastern Vancouver Island. It seems vaguely improper to begin an essay about art with a declaration about the artist's ethnicity, but in Assu's case it seems especially appropriate. Not only has he made his identity, and Aboriginal history in Canada, the focus of his entire body of work, but as Assu will tell you himself, his work would not be the same if made by anyone other than an Aboriginal artist; even if it were identical in every other sense. The emphasis that Assu puts on this blood relationship between the maker and the made is particularly resonant in the eighteen "masks" that constitute the heart of Longing because it is specifically through Assu's identity as Aboriginal that the "masks" gain added poignancy and a crisp irony. More than one hundred years after artists like Vlamink, Picasso, Matisse, and Braque found the formal inspiration to move Western art forwards by looking "back" at the Aboriginal arts of Africa, Oceania, and the Americas including Canada, Assu performs a reversal of early Twentieth century art history by looking at Western art to modernize Aboriginal aesthetic traditions of the Northwest Coast, and wrestle back their control in the context of contemporary art. He has done so using an object that is an icon of Aboriginal culture, and that marks the entrance of that culture into the consciousness of Western art.

As Assu's "masks" stare outwards from their pedestals, they enable us to look back through them, and through preceding movements in art, to the moment of contact and then co-option of Aboriginal formal values into Western art history. One of the most famous examples of this moment are the faces of the prostitutes in Picasso's 1907 painting Les Demoiselles d'Avignon. Less well known, but showing much greater sculptural treatment and greater resemblance to Assu's "masks," is the face of Picasso's 1908 Dryad. As the lessons of Aboriginal cultural objects (most commonly masks and sculpture) were subsumed by successive movements of Western art, recognizable reference to the original objects became obscured and eventually invisible. Assu's "masks" bring the primacy of this stimulant to Modern art back to the fore.

The "masks" also bring to mind the period immediately before Aboriginal cultural objects became part of Western art history, to the time when they belonged to the history of expedition and colonialism and were seen by their collectors as ethnographic objects and displayed in ethnographic museums like the Trocadero in Paris where Picasso and other artists made their discoveries. To emphasize that the objects on display in Longing are indeed masks and are meant to be understood in relationship to traditional Aboriginal ones and to the way they've historically been displayed, Assu has mounted his on brass armatures that are identical in style and technique to those used by Vancouver's Museum of Anthropology. In fact, Assu hired one of the MOA's former armature technicians to do the work.

The off-cuts of raw cedar that Assu turned into the "masks" were collected at Quinsam, part of the reserve lands of the We Wai Kai Nation. They had been left as piles of debris from the production of luxury log homes by a now defunct company that had leased property there. Assu's M.O. isn't usually the type where an image or an object is simply recognized in the world as ready to show, so even though Assu already saw masks when he found them, he initially considered altering their rough-sawn forms to make them look more traditionally Kwakwaka'wakw. Considering pieces like his copper 1884-1951 and his collections of handmade and hand-painted drums, a considerable amount of labor usually accompanies whatever he makes. His idea was to either add other materials like copper, cedar bark and color; or to sand them down to remove the distinctive marks of the chain saw. He resisted that impulse for four years as he daily looked at them stacked in his crowded Vancouver studio. It took him that long to recognize that the "masks" were already finished when he found them. In this case, patience paid off, whereas sand-paper would have been a mistake.

In form, the "masks" are truncated wedges; concave in back, their flat frontal plane reads as forehead, bridge of the nose, and chin. Central growth rings and knots read as eyes. For those that have them, shakes and checks are mouths. Like faces smoothed and distorted by a stocking, they share a generalized form, but are individual enough to imagine them as having distinct personalities or as specific characters from Aboriginal mythology.

In the West Vancouver Museum installation they have been arranged to create an imaginary narrative. Entering the museum, one stands between opposing groups of "Anglos" and "Warriors," like the Sharks and Jets of West Side Story. Though they are grouped into what looks like a shared experience, each member faces in a different direction giving the impression that (like Rodin's Burgers of Calais) each is undergoing an individual drama. On a wall above them, a single large "Spirit" hangs, while in a back room three "Bureaucrats" huddle together.

Because of the history of the West Vancouver Museum, there is a poetic symmetry between the building and Assu's work inside. It's the kind of coincidence that makes for such conceptual harmony that the term "site-specific" is inadequate. The building and the "masks" are both made from what are essentially the waste products of utilitarian purpose turned to an aesthetic end.

Before the wedges of cedar were collected by Assu, they were nothing more than byproducts from the production of log homes. The old Gertrude Lawson House, which the museum occupies, was built in 1940 from stones originally used as ship's ballast. Piles of debris to make a house, the making of a house creating piles of debris. All those stones, just like those cedar off-cuts, sat in an enormous heap until being stumbled upon and their potential for becoming something other than what they are was realized. The "masks" only partially leave their nascent stage of becoming. Like kernels, or the hard center of their own development, they retain the memory of themselves even as we imagine what they could have become had they been developed with more carving, color, and ornament.

Augmenting the "masks" is a trio of photographs produced in collaboration with Eric Deis and collectively titled Artifacts of Authenticity. Meant as a critique of the voices of authority that confer value and authenticity on Aboriginal artifacts, they show an Assu "mask" installed in: a museum display case; a commercial gallery; and a tourist gift shop. Before Assu decided on "Longing" as the title for this collection of sculpture and photographs he was calling it "Faceless," an unambiguous indictment of the invisibility that Aboriginal communities experience in Canadian society with a parallel in the disappearance of recognizable reference to Aboriginal cultural objects from Western art. Assu renamed the exhibition when he was struck by the narrative created in the photograph Museum of Anthropology, and it is the keystone to understanding the "masks." Surrounded by traditional Kwakwaka'wakw masks and artifacts, Assu understood his "mask" as looking at the others, longing to become them. This simple act pushed the tenor and comprehension of the exhibition in another direction, from accusatory and outwards, to melancholy and inwards, and made room for readings that broaden Assu's intentions.

References to things outside the issues of concern to Assu aren't meant to minimize them. As successful as Assu is in directing his work towards issues of Aboriginal status and history in Canada, and the wastes of consumer culture, it is equally compelling to see the "masks" as stand- ins for "the artist," and as an echo of the history of sculpture.

As much as a chunk of cedar might embody a yearning to belong to the valued objects that surround it, or to the era, or cultural place from which its neighbors in the display case come, it also stands as a personification of artistic longing; not necessarily Assu's, but any artist's. That longing may be for a time, future or past, of perceived authenticity (for Assu that may be before the contact with Europeans that destroyed his ancestral culture; for others a time without irony). It may also be an expression of that overwhelming artistic longing to transform one's experience of the world into art.

Of particular interest in Assu's decision not to alter the surface of the "masks" with additional finish is the denial of his own artistic longing and his ability to say "these are enough;" that the "masks" already answered their purpose when he found them. By doing so, Assu acknowledges that sometimes, no matter how great our longing, we have to remain humble in the face of our world and admit that it cannot be made better by our transformations. But, of course, in the choosing, Assu has transformed the cedar already.

I say "echo" regarding the "masks'" as referents to the history of sculpture because the sculptures that resonate in them are more felt in the whole body (like a vibration in the ear) than seen and understood by the eye. The "masks" push the history of sculpture to which they refer further back than their entrance at the turn of the Twentieth century to times and places to which they don't belong at all except as they can be put together in the imagination. When I look at the "masks," I feel the hollow head of Seated Boxer of Lysippos, the unfinished sculptures of Michelangelo, the fragments of Rodin (especially Rodin's Mask of the Man with the Broken Nose), the found and readymade objects of Duchamp, and the traditional Northwest Coast masks of anonymous carvers deep in history, and those more contemporary like Robert Davidson and Henry Hunt.

In its restraint and earnestness, Assu's work reclaims some of that authenticity compromised by the ruination of earlier Aboriginal culture. Longing is simultaneously a confounding of the primary stereotype of Northwest Coast Aboriginal art; a return to the culturally significant moment when Aboriginal masks entered Western art; and an act of cultural repatriation. By adding a contemporary aesthetic parallel to its traditional expression, Assu is on the frontier of cultural transformation. It puts him on a path that never existed in the past.