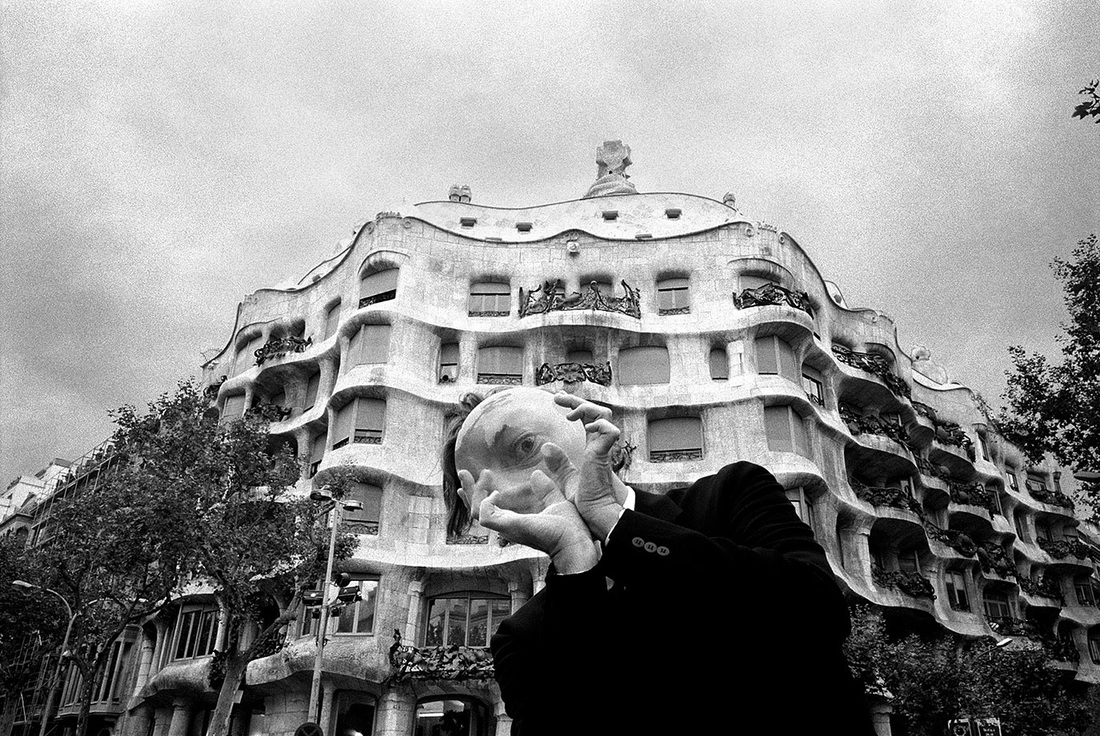 Barcelona, 1998
In the winter of 2002 I had the pleasure of writing about the work of Gerald Janssen.  It was refreshing, and a relief, to see a contemporary artist, especially a photographer, so unlike his contemporaries.  Janssen’s photography defied the then current genre of “here are my friends or here's what I did on my summer vacation;” the type Dave Hickey referred to as “another giant photograph of two German tourists standing beside a mailbox.”  Revisiting those photographs now, I find it no less so.

In "The Mythic Mind," Janssen turned to photographs of his dark suited and masked self in the landscape as his modus operandi.  Ubiquitous and enduring, the mask expresses something fundamental about our grasp of visual reality; that there are other realities just beyond its veil.  Staring into a mirror we are all transcendentalists. Confronted by the physical reality of our faces, we acknowledge the lurking insubstantiality of the mind's presence.  The gulf that separates these creates in Janssen a kind of terror that is palpable. 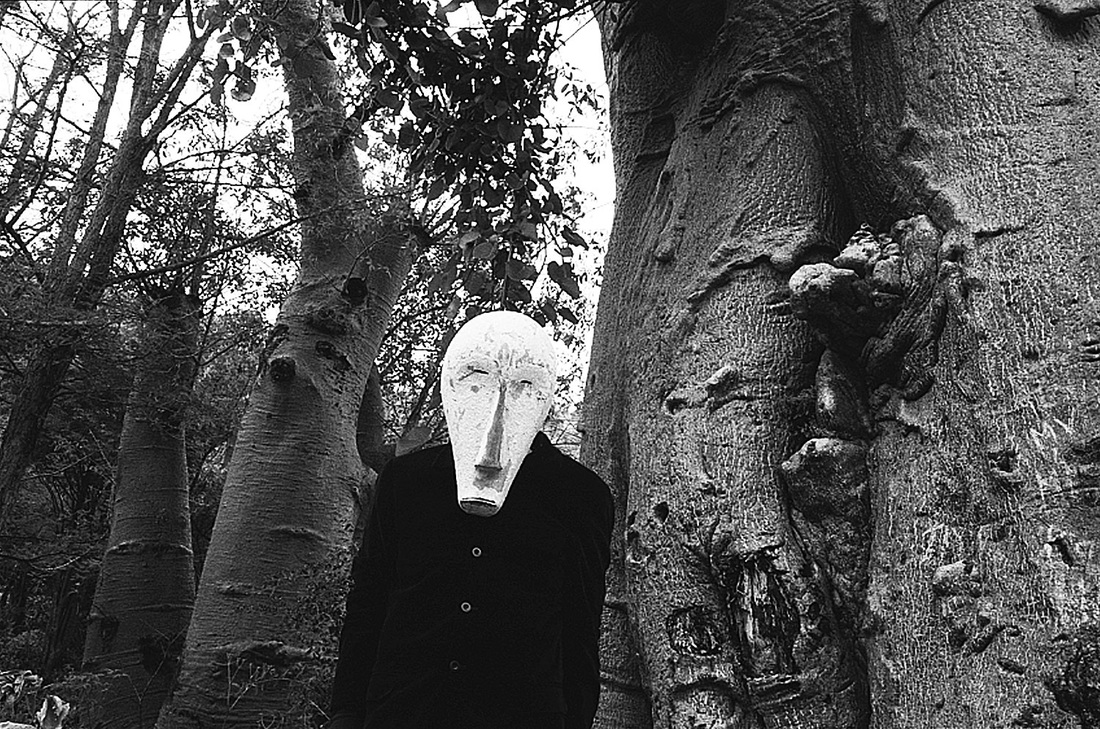 South Africa, 2000
The mask and the mirror (the self-portrait), show us that only by masking can we see ourselves.  When looking in a mirror we immediately compose ourselves into the self we want or expect.  We rarely if ever see the person others do.  Witness our dismay at photographs taken when caught off guard.  When masked we don't look at ourselves, but search through our eyes and into the minds which are the seats of ourselves.  This is one of the things which distinguishes Janssen's work.  While others are concentrating on the outward appearance of how things look or are manufactured to look, Janssen is trying to catch glimpses of the inward and how things are or may be.  This gives to his work a necessity, and necessity is crucial.  Taken early in the morning, just after sunrise, a fleeting performance is caught in 1/250th of a second.  It's about furtiveness, of light, of time, of identity, of the moment.  Contrasting the furtiveness and the glimpses and the momentariness, the compositions make the light and the action solid and immovable, a momentary stillness of a mind in flux. 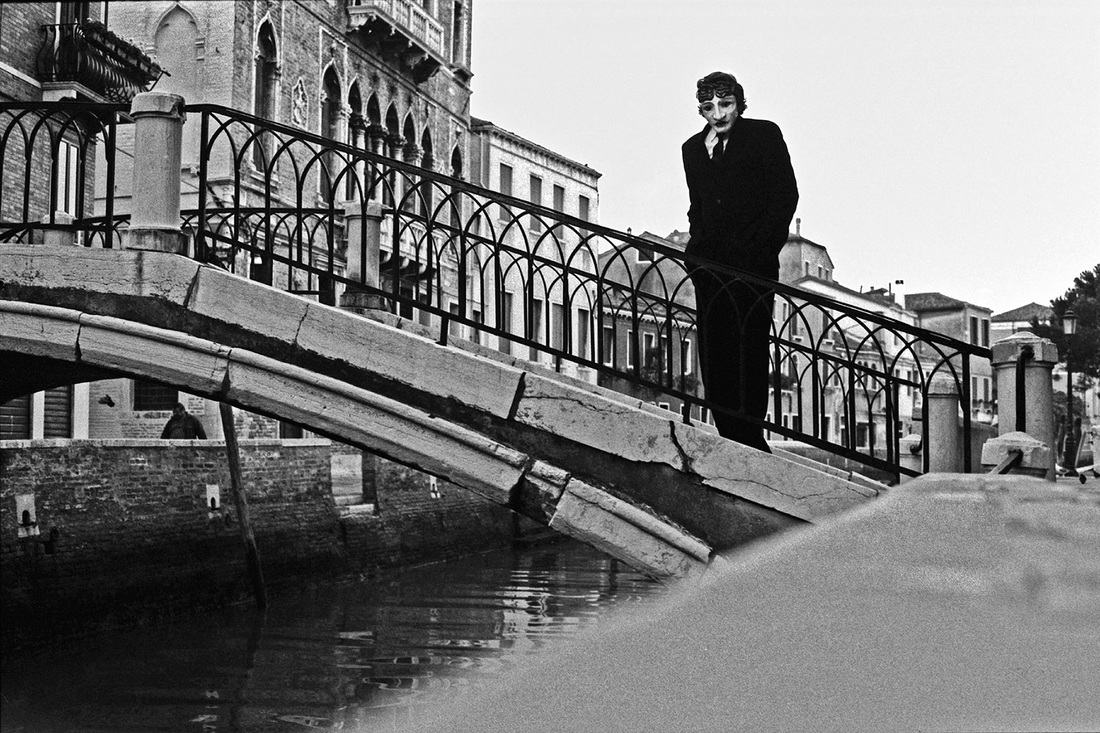 Venice, 1998
At heart it doesn't matter who Janssen's strange character with the shifting face is because the photographs are compelling and evocative.  Their scale is right.  There is a modesty about it just as there is a modesty in Janssen's choice of black and white film.  The scale of spectacle to which so much contemporary photography has been reduced is both bigger than, but less than the scale of the mythic.  The mythic is human, spectacle not.  More than anything, it's about the light, the way if flows and pools and eddies, making the real visible, but intangible.  It's always been about the light.
﻿